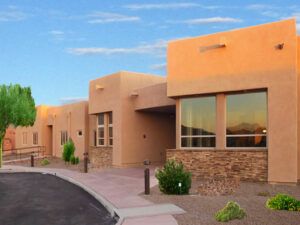 The Green House approach to senior supportive care strongly influenced the building and running of the Academy Villas.  Recently, a research study was conducted that offers support for this approach (New York Times).  This nine year study found that the Green House approach is “a preferable model of care.”  Specifically, it led to a smaller percentage of residents who were bedridden.  Further, there were fewer avoidable hospital visits and readmissions. The study suggests that these and other positive outcomes are related to to the central aspects of the Green House approach.

Residents in Green House facilities can determine the rhythm of their day. This is because of their small size and well-trained staff. For example, residents can get up when they want, and eat breakfast when they wish. They know all the other residents and are close to the staff members. Further, the study found that, on average, the well-trained staff members spent twice as many hours per day with individual residents than in other types of facilities. In addition, Green House staff members know the likes and dislikes of the residents, and are therefore more aware of changes in health conditions. 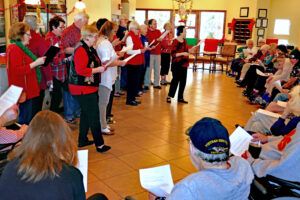 This year, the set of songs included two Hanukkah favorites, since Hanukhah fell just before Christmas.  It was glorious to hear all voices raised in singing these popular holiday songs.  This has become a well-loved tradition in Academy Village/Altura as well as in Academy Villas. Joining the group were several grandchildren of the Academy Villas residents.  The children particularly enjoyed singing “Jingle-Bells”. 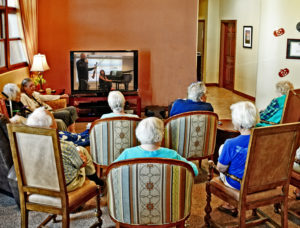 The musical event on the screen in the photo above was an astounding program of piano and violin that had the audience on their feet after each piece.  On the left, is the violinist, Steven Merkel, who is the concertmaster of the Phoenix Symphony Orchestra.  The pianist was Paul Fan.  She is the principal pianist of the Tucson Symphony Orchestra, and Regents’ Professor Emeritus of Music at the University of Arizona.  Merkel and Fan were celebrating 15 years of collaboration which has taken them all over the world. During the programs, the musicians pause to answer questions from the audience.  In the photo above, Steven Merkel is answering a question about his violin.

Other Arizona Senior Academy programs that will be videoed, live, to the Academy Villas include lectures that are given on Wednesdays and Thursdays.  For example, in this same week Archaeologist Allen Dart described Arizona’s earliest cultures through pottery and other items. A,d then, on Thursday, University of Arizona law researcher, Mark Verstadt shared his views of the “fake news” phenomenon. He also discussed the conclusions that he and his colleagues reached in a major study about “fake news” and its impact.